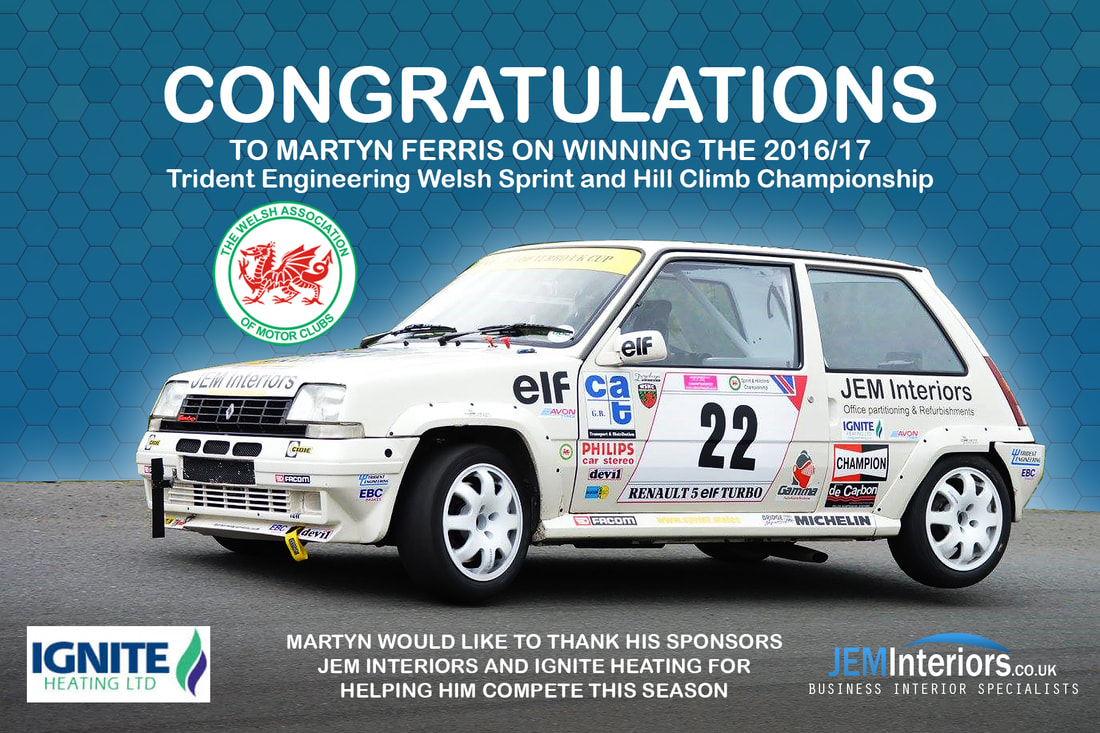 ​We headed to Llandow for our first Welsh sprint venue with a strong contingent of 14 Championship contenders. Despite heavy rain the day before, Saturday was dry, breezy and sunny. Once again the weather proved to be with us.
The Modified Production Cars 1400cc to 1800cc, which included Martyn Ferris in his Renault 5 GT Turbo, took to the track.

Despite having to contended with a few timing issues through the morning practice session and having to do a re-run, Martyn took the class win with an impressive time of 90.22, his first outing of the season. 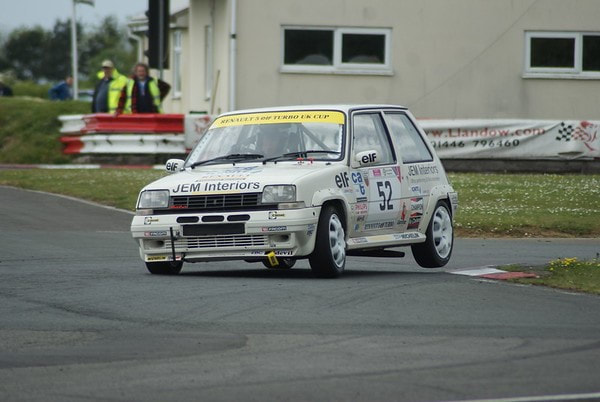 ​With our first Welsh Sprint behind us, we head to the first Welsh Hillclimb event of the calendar. Nestled amongst picturesque views of the Preseli Hills and the Welsh Water-managed reservoir, Llys Y Fran is great setting for drivers and spectators alike. 16 Championship contenders were given a dry day, with a little bit of breeze thrown into the mix with a small amount of sunshine.

In the Modified Production Cars 1400cc to 2000cc we have a class of 6 cars, of which 4 were Trident Contenders, so battle commenced with a mixture of past championship contenders. Martyn Ferris (Renault 5), Paul Meadows (Peugeot 205) and new championship contenders, namely Lloyd Bettinson in his Peugeot 106 Rallye and Frank Harris in his newly acquired Renault Clio 197 Sport.
Continuing on where we left off at Llandow, we had Martyn and Paul fitting it out for 1st and 2nd within the class, with a hairs breath between the two of them again. The final result was 1st in class to Martyn Ferris having achieved a timed run of 51.92, with Paul Meadows hot on his tail for 2nd in class with a 51.95. This battle resulted in Martyn setting a new target time on his second outing for 2018.

​We kicked of June with a double header at Pembrey, the first day being run on the original track and the second on the new layout.

Weather proved to be challenging and changeable, with the morning session being one of torrential rain with the afternoon full of sunshine. Unlike other sprint events we did not kick off with the SP Class, but with Modified Production Cars 1400cc up to 2000cc. In a class of four we had three Championship Contenders battle it out for podium placement, namely Paul Meadows, Lloyd Bettinson and Martyn Ferris.

​The first time run saw Martyn take the lead, followed by Paul and then Lloyd, but not content with third place Lloyd managed to improve on his last run of the day by over 6 seconds, resulting in second place at the end of a challenging day, only 1.81 seconds behind Martyn. After two timed runs Martyn achieved a time of 131.66, Lloyd 133.47 followed by Paul on 136.47. 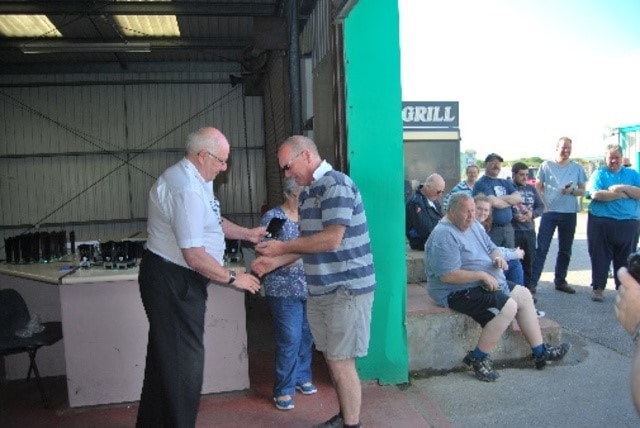 It was back to the hills of Brecon after a wet/dry sprint around Pembrey, to our second double header of the month. The Epynt Military Ranges were a hive of activity this weekend, with 49 drivers on the Saturday, and 57 drivers on the Sunday.
​
Once again a mixed bag of weather with rain all day on Saturday, but a little dryer on Sunday with rain at times.
Martyn Ferris who was placed in the Modified Production Cars over 2001cc alongside a Ford Escort Mexico Mk1. Martyn having his work cut out competing against a powerful 3lt Millington Engine, but managed to not only secure 1stin class but also achieve a great timed run of 70.12. 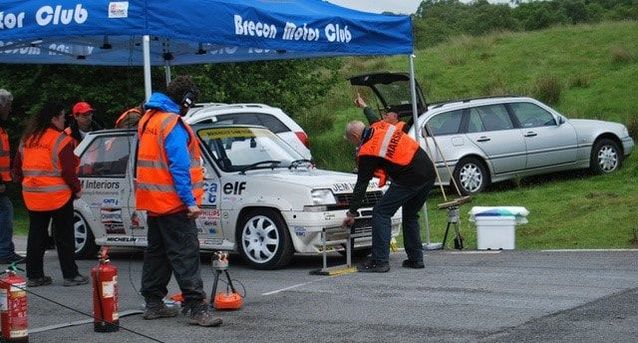 ​Modified Production Cars 1401cc up to 2000cc, saw five championship contenders running in a class of 7, with the inclusion of Martyn Ferris in his Renault 5 GT and a Westfield that were in different classes the day before.

One of the biggest classes up the hill was the Modified Production Cars over 1400cc up to 2000cc. In amongst a class of 8 cars, we had 4 Championship contenders. 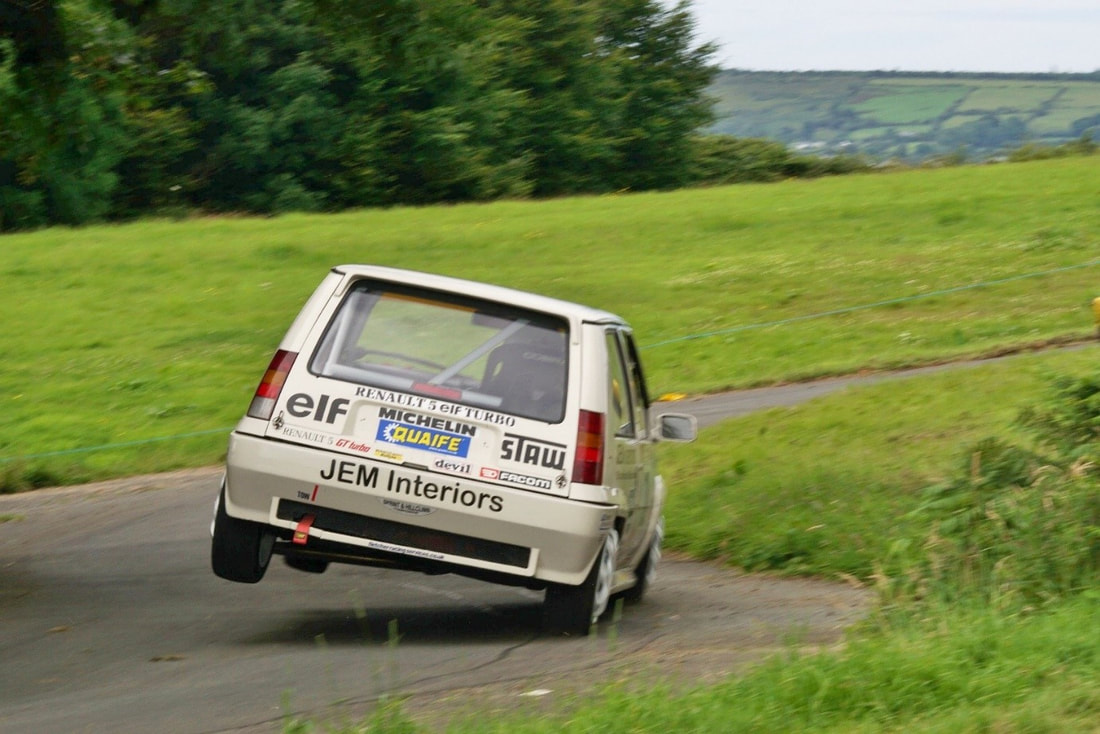 Modified Production Cars 1401cc to 2000cc, where we saw Wynne Morgan and Martin Ferris battle it out. Both produced a competitive time in their first time run, with Martin on 68.14 and Wynne on 68.47.

​Whilst queuing for their second timed run a few rain drops fell, but it was short lived with the sun soon appearing giving them both a second dry run. Martin posted a final timed run of 69.95, with Wynne improving ever so slightly on his first time run with a 68.43. Martyn secured 1st in class on his first timed run with Wynne securing second place. 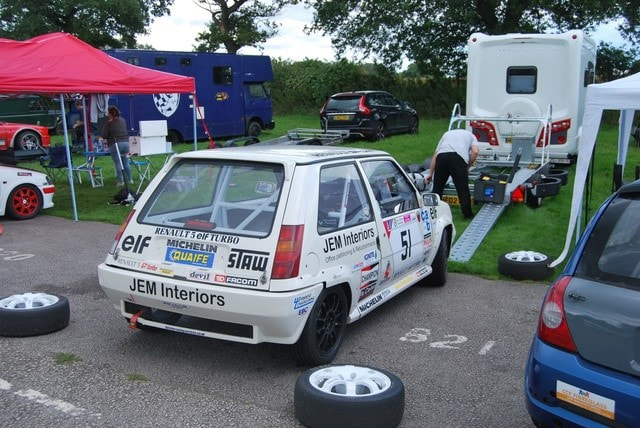 Modified Limited Production Car Class up to 1800cc in which Martyn Ferris also secured 1st in class out of a class of 5 cars, with a very impressive time of 31.09
Sunday Round 22
Martyn once again secured 1st in class within the Modified Production cars up to 1800cc with a very competitive time of 30.81. Yet again setting a new Target time for the Championship class for 2018.

​The Modified Series Production Car class was merged with the Modified Limited Production Car class, which meant that Wynne Morgan and Martyn Ferris had some stiff competition but both managed to post some great times in during the one and only dry run that we had all day. Wynne posted a time of 67.66 in his Renault Clio Cup and Martyn in his Renault 5 GTi got down to a time of 65.75, not only setting a new Target time for the Championship Class for next year, taking 3rd in class on the day, but also securing the Win for the 2017 WAMC Sprint & Hillclimb Championship.